The following introduction was originally published by Jérémy Faivre on his own blog. This new version is now part of Ceramic website's guides section.

Ceramic is a cross-platform framework created by Jérémy Faivre that lets you create 2D apps and games written in the Haxe programming language.

Ceramic was under quiet development for several years. It started as some kind of personal project and then grew into something used daily to create various kind of apps and ship real games in production.

Note: this article is a bit technical and a background in game or software development may be required to understand all of its contents.

It may seem odd not to use mainstream software like Unity to create video games or other graphics intensive apps. Why setting up an entire new tool?

Unity is nice, you can build a lot of things with it. But what if you come from a background where you enjoyed a lot lighter, more code-centric and 2D oriented tools on the web like Pixi or Phaser?

What is great with Phaser or Pixi is how simple they are to get started. You simply write a few javascript files, load them in your browser and yay, you got something working already! Unfortunately, all this joy and fun is focused to the web. It works great in web browsers, can work on mobile but to do so you need to embed a pixi or phaser app as a webview inside an iOS or Android app, and performances won’t be as good as if you created a native app.

On the other hand, you could use Unity to create games and apps that can be exported to native platforms, but the steps required become more complicated and you start to depend on a huge closed source software to write ANY app or game. Everything you create has to display a Unity splash-screen unless you pay a license fee.

It is totally OK to pay license fees to use Unity in the context of a professional game studio. But I personally create plenty of tiny games, apps, creative coding projects as an individual and wanted to find an alternative that doesn’t depend on something as heavy as Unity.

Then, how to have a tool that can target the Web, but also natively target platforms like iOS, Android, PC, while still keeping most of the benefits of Phaser or Pixi: being open-source, easy to use and not huge like Unity?

The Haxe programming language lets you write code that can be transpiled into other languages such as C++, Javascript or C#. Yes, that means you write a single codebase that can then be converted to C++ or JS and run natively or in the browser!

As a comparison, Unity needs to perform quite complicated transformations to make your game run in the browser: it needs to transpile your C# code into C++ via IL2CPP, then transform the resulting C++ code into WebAssembly via emscripten. The whole process is pretty slow and means you cannot iterate quickly when testing a web export of your app/game. With Haxe, transpiling your code into javascript and running it in the browser is a matter of a few seconds!

Haxe is an excellent open-source programming language and it's really a joy to use it daily. It has some good features making it very powerful and scalable (macros, strictly typed, enums and pattern matching) yet is fairly easy to pick up if you already know more common languages like C#, JS, Java, AS3 or TypeScript.

I tried these one by one before starting to work on ceramic, even did some projects with some, here’s some feedback:

Note: although I had some issues with these tools, they are great and make a lot of developers happy. I am only talking about my personal experience, which is subjective and tied to my preferences and project needs. You should definitely check these out yourself! I don’t consider ceramic as being a better tool than those. It’s just a different option with its pros and cons and ways of solving problems ✨.

A few things displayed with Ceramic

I started working on Ceramic once Luxe (its haxe version) somehow got discontinued. Ceramic started as a wrapper around Luxe. Like, a high level API that runs on top of Luxe. I maintained a fork of Luxe for a while to ensure it worked well with ceramic and newer versions of Haxe. Then ceramic slowly evolved into something else. I created a backend system to separate the public API from its internals and to prepare for better cross-platform support.

Backends are simply modules that let you port the engine to new platforms without having to rewrite the entire engine. It only contains the low level code strictly necessary to load assets, display graphics on screen, play audio, handle input…

Ceramic’s first backend was using Luxe internally. It was very convenient at the time because it allowed to put very quickly the engine on foot, target mobile, desktop and webgl just fine. Performances were fairly good but not optimal because luxe was not really intended to be used this way, but it was a good transitional state and allowed to design ceramic’s high level API as I go.

This transitional state lasted for a few years, until I did set up a more tailored backend called Clay. Basically, clay does the same as luxe internals, but specifically adapted to be used with ceramic, with only the features needed that don’t overlap with ceramic features.

There are currently 3 backends: Clay, Headless and Unity. Clay is the default backend, Headless allows to run ceramic as a server or a CLI script and Unity backend exports your whole Ceramic project into a Unity project (this specific part about Unity is explained in this blog post). 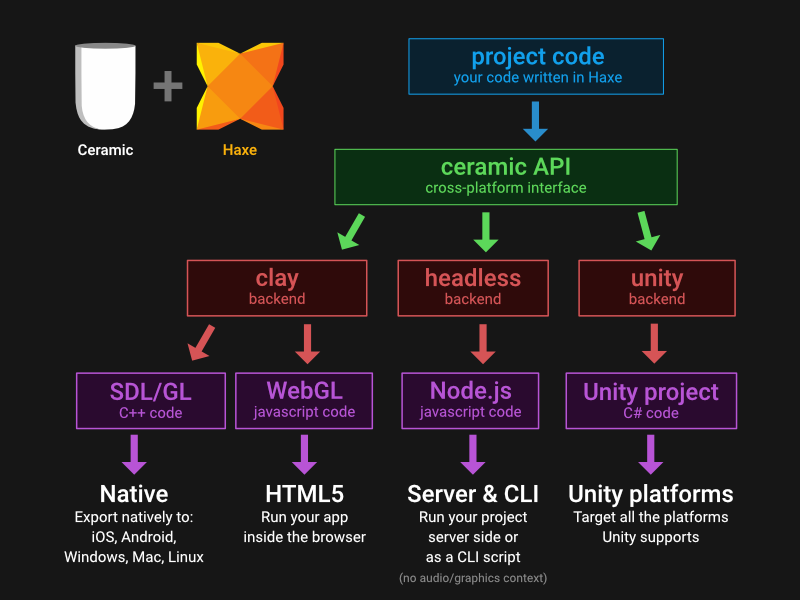 A chart showing how Ceramic is architected and what platforms you can export to.

With this separation of concerns between high level API and backends, ceramic is designed from the grounds up to be portable. New backends could be added in the future to handle new platforms, without having to change the high level API. The latest addition is the Unity backend, which is pretty new for now but already successfully runs ceramic apps like my latest jam game.

Ceramic doesn’t provide any 3D pipeline like Heaps or Kha, it is focused on 2D and tries to do that very well. These are some of the things ceramic provides out of the box on every backend (no audio/graphics context on headless/node.js):

How is Ceramic used? #

Creating Ceramic was a way for me to experiment new things. Not only for creating games, but also create some generative art / creative coding projects (see this installation or most of my animations posted on instagram, which are all made with ceramic).

An animation made with Ceramic.

Ceramic has been used by La Gamerie to release a few games with it on iOS and Android (see Make More Views, which contains advanced UI, a lot of animations using Spine, fully customizable studio and avatar etc… all made with Ceramic).

I hope this article gave you a little more information about what Ceramic is and that made you want to try it! If that's the case, go to the Getting Started section to Install Ceramic from the link below 👇👇👇 .